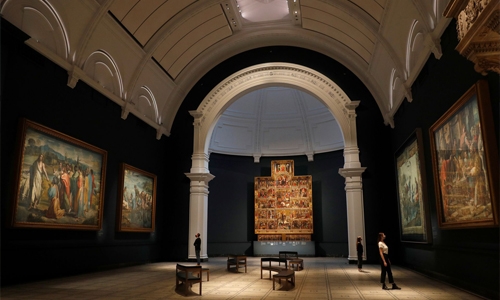 Indian Culture Minister G Kishan Reddy on Friday said that the National Gallery of Australia would be returning 15 artefacts to India through the concerted efforts of the Ministry of Culture and Ministry of External Affairs under the leadership of Prime Minister Narendra Modi.

"Through the concerted efforts of Ministry of Culture & MEA under the leadership of PM Modi, I'm happy to share that 15 culturally significant & historically relevant artefacts will be returned to India by the National Gallery of Australia," said Reddy.

The artefacts include - Painting of Shrinathji, Page from Ragmala series, Yaksha Bhairav, Kali yantra, Young lady with elaborate sari, Shri Lakshman Chand ji before Shri Dursham Ram ji, Krishna and Arjuna, Varaha rescuing the Earth Goddess, Amorous couple, Shiva and Parvati, Baby Krishna on a banyan leaf, Portrait of a gentleman, and three sculptures from Tamil Nadu, which include the two bronze sculptures of the child Saint Chandikesvara and dancing Sambandar, along with a sandstone image of Shiva Bhairava.

The national art museum of Australia is set to return the collection of artworks to India, including bronze and stone sculptures, a painted scroll and photographs.

The artwork -- acquired by the National Gallery of Australia (NGA) between 1989-2009 -- is associated with disgraced art dealer Subhash Kapoor.

The museum where the art was preserved has established that the artefacts were stolen and illegally exported. Nick Mitzevich, who is the director of NGA said that Kapoor has demonstrated that his business practices were not ethical.

This is the fourth time the NGA will return antiquities it bought from Kapoor, who is awaiting trial after being accused of running a smuggling ring for artefacts.

Similarly in 2014, the museum agreed to return a USD 5 million statue, Shiva as Lord of the Dance, to India. The bronze statue was handed over to Prime Minister Narendra Modi.