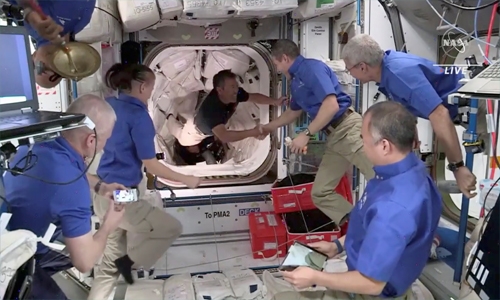 A four-astronaut team arrived at the International Space Station yesterday aboard the SpaceX Crew Dragon capsule Endeavour, NASA said, after becoming the first crew ever to be propelled into orbit by a rocket booster recycled from a previous spaceflight.

The Endeavour capsule, also making its second flight, was launched into space on Friday atop a SpaceX Falcon 9 rocket from NASA’s Kennedy Space Center in Florida. SpaceX is the Elon Musk’s commercial rocket company. The Endeavour docked to the space station complex at 5:08 a.m. EDT (0908 GMT) while the spacecraft was flying 264 miles (425 km) above the Indian Ocean, NASA said in an update on the mission. Onboard were two NASA astronauts - mission commander Shane Kimbrough, 53, and pilot Megan McArthur, 49 - along with Japanese astronaut Akihiko Hoshide, 52, and fellow mission specialist Thomas Pesquet, 43, a French engineer from the European Space Agency.

The mission marks the second “operational” space station team launched by NASA aboard a Crew Dragon capsule since human spaceflights resumed from American soil last year, following a nine-year hiatus at the end of the US space shuttle program in 2011.

How to exercise safely during Ramadan