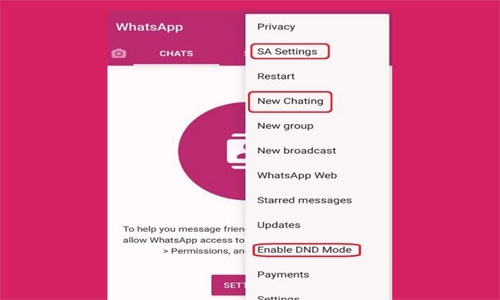 Experts have warned users against a malicious link that claims to offer a pink version of users’ WhatsApp accounts, while adding new features.

In a tweet, Indian cybersecurity expert Rajshekhar Rajaharia warned that clicking on the link would cause users to lose "complete access" to their phones.

Multiple users have been unknowingly sharing the link, masked as an official update from WhatsApp.

“Once installed, the fake WhatsApp app starts circulating a message that contains the link to download it. The aim of the hacker appears to be to collect user data of as many users as possible,” said Rajaharia, speaking to Gadgets 360.

Rajaharia added that WhatsApp Pink had largely been targeted at media persons and the police, with a link to download the app being initially sent to the police officers in Delhi and Rajasthan.

He was first informed of the virus by Delhi Police inspector Data Ram Yadav, who spotted the link circulating among some WhatsApp groups that had policemen.

“The current case of Whatsapp Pink or [previous scam] Whatsapp Gold is also a case of malware impersonating as fake WhatsApp feature apps.”

When asked for a statement, WhatsApp said, “Anyone can get an unusual, uncharacteristic or suspicious message on any service, including email, and anytime that happens we strongly encourage everyone to use caution before responding or engaging.

"On WhatsApp in particular, we also recommend that people use the tools that we provide within the app to send us a report, report a contact or block a contact,” it added.