Beyoncé, Taylor Swift could have historic night at Grammys | THE DAILY TRIBUNE | KINGDOM OF BAHRAIN 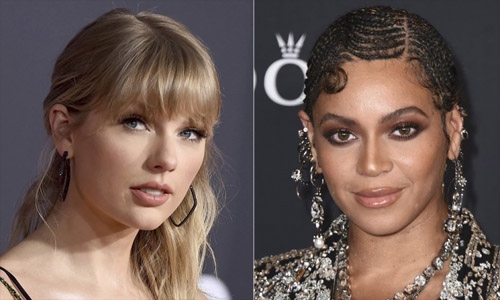 Beyoncé, Taylor Swift could have historic night at Grammys

It could be a night for the history books for Taylor Swift and Beyoncé at Sunday’s Grammy Awards — for both good and bad reasons.

Swift could become the first woman to win the show’s top prize, the album of the year, three times. Her first surprise album of 2020 — the folky, alternative adventure “folklore” — is competing for the top honour, an award she first won in 2010 for “Fearless,” her breakthrough that helped established her as a bona fide pop star even though she sang country music. She won again in 2016 for “1989,” her first full-length pop album that dominated the charts with a bounty of hits, The Associated Press reports.

Stevie Wonder, Frank Sinatra and Paul Simon are some of the male performers who have won album of the year three times. Producers or engineers have also won the award three times, including Phil Ramone, Ryan Tedder, David Foster, Bob Ludwig, Serban Ghenea and others.

The only person to win the prize four times is mastering engineer Tom Coyne, who died in 2017.

Beyoncé has never won album of the year throughout her career — she’s not up for the honour this year because she didn’t release a project during the eligibility period — but she is the most nominated act. With 24 wins and nine nominations this year, she could surpass Alison Krauss’ 27 wins and become the most decorated woman in Grammys history.

Beyoncé’s “Black Parade” scored nominations like record and song of the year as well as best R&B song and best R&B performance, while her guest appearance on Megan Thee Stallion’s “Savage” earned bids for record of the year, best rap performance and best rap song.

Beyoncé holds the record for most Grammy nominations for a female act, with 79. She and Paul McCartney tie for second place among all Grammy nominees, only behind Quincy Jones and Jay-Z, who have earned 80 nods each.

The royal family of music could walk away with several wins for their home. Jay-Z co-wrote “Black Parade” and “Savage,” earning him nominations for song of the year, best R&B song and best rap song. He has won 22 Grammys throughout his career.

Their daughter, Blue Ivy Carter, is nominated alongside her mother for the best music video for “Brown Skin Girl.” Ivy Carter gives a vocal performance on the song and appears in the video; she is also listed as a co-writer of the song with Jay-Z and Beyoncé.

Ivy Carter, 9, could become the second-youngest person to ever win a Grammy. Leah Peasall was eight when The Peasall Sisters won album of the year at the 2002 show for their appearance on the T Bone Burnett-produced “O Brother, Where Art Thou?” soundtrack. “Brown Skin Girl,” a song celebrating brown and dark-skinned women, has won Ivy Carter several awards, including two Soul Train Music Awards, a BET Award and a NAACP Image Award.

While Beyoncé could have a historic night, history could repeat itself and she could be shut out of winning a top award — a common occurrence for R&B and rap artists throughout Grammy history. Of her 24 wins, only one has been for one of the big four Grammys, the song of the year. She has lost album of the year three times and record of the year five times.

Jay-Z has never won a top award, and he and his wife join a list of mostly Black performers who have been restricted to wins in the rap and R&B categories, including Kendrick Lamar, Kanye West, Mariah Carey, Eminem, Drake, Missy Elliott, Mary J. Blige and more.

This year The Weeknd was the one who was snubbed. Despite having the biggest hit of 2020 with “Blinding Lights” and a top-selling, multi-hit album, he didn’t earn any nominations. He’s won three Grammys so far — only in the R&B categories — but he’s vowed to boycott the Grammys because he doesn’t agree with how the Recording Academy selects its winners.

The album of the year prize has only be given to two rap-based acts — Lauryn Hill’s “The Miseducation of Lauryn Hill” and Outkast’s “Speakerboxxx/The Love Below.” Though rap is the most popular genre today, no rap albums scored a nomination for the top award this year. A rap song was never awarded song of the year or record of the year until Childish Gambino made history in 2019 with “This Is America.”

Beyoncé and Megan Thee Stallion’s “Savage” could become the second hip-hop song to win the record of the year.

Other women who could make history Sunday include Grace Potter, who has the chance of being the first female performer to win best rock album in over two decades, and sister trio HAIM, the first all-female rock band nominated for album of the year.

Though 84 awards will be handed out — roughly 10 during the live telecast and the rest during the pre-ceremony — viewers are most likely watching for the performances.

Trevor Noah will host the show, which airs at 8 p.m. Eastern on CBS and Paramount+. The Grammys were originally scheduled for Jan. 31 but were pushed back because of the coronavirus pandemic.