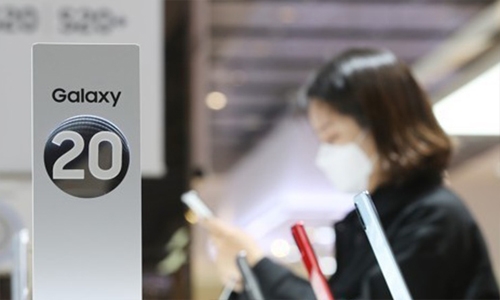 Samsung Electronics Co. was the top vendor in the Europe, Middle East and Africa (EMEA) smartphone market in the third quarter of the year, a report showed Wednesday, despite sales decline.

Samsung shipped 29.6 million smartphones in the EMEA market in the July-September period for a 31.8 percent market share, according to industry researcher International Data Corp. (IDC).

The figures were slightly down from a year ago when the company shipped 31.6 million smartphones for a 34.7 percent market share. However, the South Korean tech giant was able to defend its top spot with solid performance in Europe, according to Yonhap News Agency.

"Samsung had a strong quarter across Europe, and its share rose above a third of the market to 37.1 percent in the third quarter," IDC said. "It was clearly one of the brands that benefitted from Huawei's retrenchment."

Samsung was followed by Xiaomi Corp., which moved up three spots to take second place with robust sales increase in Europe. The Chinese electronics giant shipped 13.4 million smartphones in the EMEA market, up 121.9 percent from a year ago, for a 14.4 percent share.

Its Chinese compatriot Transsion moved up to the No. 3 spot with a 13.4 percent market share after shipping 12.4 million smartphones in third quarter, up 43.9 percent from a year ago.

Apple Inc. dropped to fourth place with a 12.7 percent share, with its iPhone shipments declining 0.2 percent on-year to 11.8 million units.

China's Huawei Technologies dived from the runner-up position to the fifth spot after its smartphone shipments plunged 37.8 percent on-year to 10.8 million units in the third quarter.

The overall EMEA smartphone market grew 2.1 percent on-year to 93.1 million units in the third quarter for a value of $27.7 billion, according to IDC.

IDC said it expects the EMEA smartphone market in the fourth quarter to be "relatively subdued" and not to be bigger than a year ago.