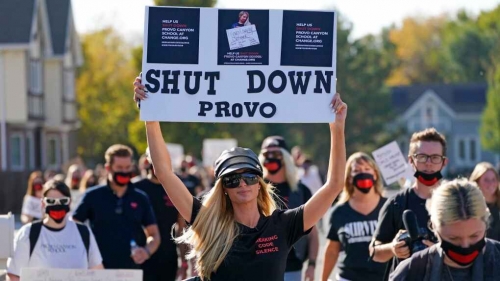 Paris Hilton has been speaking out about the abuse she said she suffered at a boarding school in Utah, and on Friday she took her push nearly to the school’s front doors.

Hilton organized a protest in a park near Provo Canyon School, along with several hundreds of others who share stories of abuse they say they suffered there or at similar schools for troubled youth. She is calling for the closure of the school. Hilton, a socialite who became a reality TV star, and many others wore black T-shirts with red letters on the back that said, “survivor” and on the front read, “breaking code silence,” a reference to Hilton’s new campaign to compel others to shed light on what she believes is a corrupt industry that manipulates parents and traumatizes youth. It was Hilton’s first time back to the area since she was there as a teen, when she says she was verbally, emotionally and physically abused in what she described as “torture.” Since a documentary titled “This is Paris” was released on YouTube last month, other celebrities have also spoken out about their experiences at that school or others like it, including Michael Jackson’s daughter Paris Jackson and tattoo artist Kat Von D.

England Bounce Back To Beat Belgium 2-1