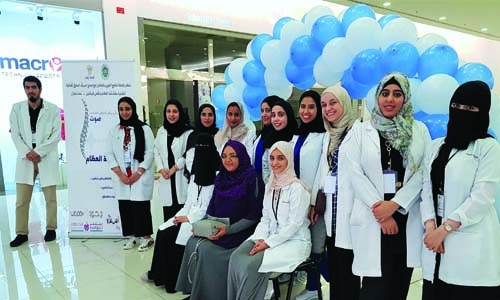 Students of the College of Medicine and Medical Sciences at Arabian Gulf University (AGU) organised a campaign to raise awareness of the dangers of osteoporosis and vitamin D deficiency, entitled “Giving Voice to a Silent Disease” in conjunction with World Health Day this April. The campaign was held at Seef Mall - Muharraq under supervision of Assistant Professor at AGU, Rheumatology Consultant Dr Adla Bakri.

Campaign Organiser and student at the College of Medicine Razan Al-Ghamidi said that the campaign had many stages, whereas the first stage defined osteoporosis. The second stage introduced sources of nutrition containing calcium and foods that prevent or delay the occurrence of osteoporosis, in addition to harmful foods, which accelerate it. The focus of the third stage was to raise awareness of vitamin D; its importance, sources and everything pertaining to it.”

On her part, Reham Fathi, student at the College of Medicine said that the campaign included a special kids’ corner, providing children with simplified knowledge on the importance of bone strength and how to prevent the disease, in addition to some recreational activities such as face painting, colouring and games.

The campaign attracted a large number of individuals of varying ages and societal categories, estimated at 600 beneficiaries.