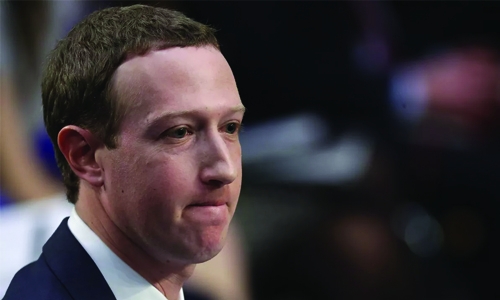 Zuckerberg referred to AI technology about 23 times during his five-hour testimony before a joint Senate committee hearing on Tuesday, saying that it would one day be smart, sophisticated and eagle-eyed enough to fight against a vast range of platform-spoiling misbehaviour, including fake news, hate speech, discriminatory ads and terrorist propaganda.

Over the next five to 10 years, he said, artificial intelligence would prove a champion for the world’s largest social network in resolving its most pressing crises on a global scale – while also helping the company dodge pesky questions about censorship, fairness and human
moderation.

“We started off in my dorm room with not a lot of resources and not having the AI technology to be able to proactively identify a lot of this stuff,” Zuckerberg told the lawmakers, referring to Facebook’s famous origin story.

Later in the hearing, he added that “over the long term, building AI tools is going to be the scalable way to identify and root out most of this harmful content.”

But Facebook’s AI technology can’t do any of those things well yet, and it’s unclear when, if ever, it will be able to.

Tech experts had a different opinion on why Zuckerberg spent so much time offering tributes to the much-hyped but largely unproven tech advancement: The shapeless technology could help the company pawn off blame from the humans
creating it.

“AI is Zuckerberg’s MacGuffin,” said James Grimmelmann, a law professor at Cornell Tech, using the film term for a plot device that comes out of nowhere to help the protagonist to save the day.

“It won’t solve Facebook’s problems, but it will solve Zuckerberg’s: getting someone else to take responsibility.”

To many of us, AI is the amorphous super-technology of science fiction, animating friendly computers and killer robots.

Silicon Valley leaders often promote that vision of AI by suggesting that it will serve humanity as a quasi-magical force for good. But today’s artificial intelligence is now being used in far more basic forms: driving cars, tracking cows and giving a voice to virtual assistants like Siri and Alexa.

Facebook uses AI in understated but important ways, such as for recognising people’s faces for tagging photos and using algorithms to decide placement of ads or News Feed posts to maximise users’ clicks and
attention.

The company is also expanding its use, such as by scanning posts and suggesting resources when the AI assesses that a user is threatening suicide. (The Washington Post)

Most Gulf stocks in red over Syria tension