Hidd, Bahrain Club play to a draw in football league | THE DAILY TRIBUNE | KINGDOM OF BAHRAIN 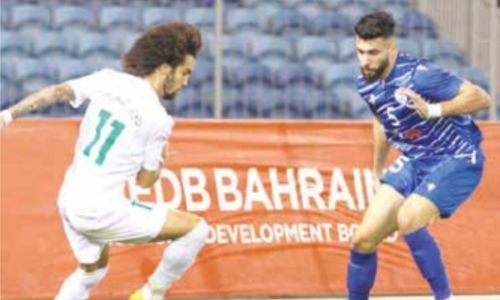 Hidd and Bahrain Club played to a 2-2 draw in their week 10 clash of the 2022/2023 Nasser bin Hamad Bahrain Premier Football League.

On target for Hidd were Thiago Augusto Fernandes and Talal Al Sherooqi, while scoring for Bahrain Club was Joel Vinicius Silva Dos Santos, who had a brace.

Thiago opened the scoring in the match with a goal in the fifth minute, but Dos Santos was able to equalise just 12 minutes later.

That was enough to send the two teams into the break deadlocked. Dos Santos then gave Bahrain Club the lead in the 62nd minute until Al Sherooqi headed in to level the scores once more in the 78th minute.

With the result, Hidd claimed their second draw as they improved to 14 points in the middle of the league table, while Bahrain Club posted their fourth stalemate to go to 10 points.