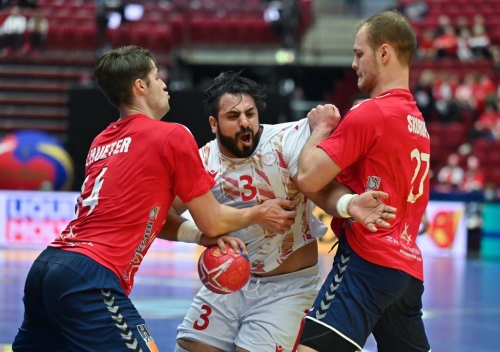 Bahrain made history last night in their resounding 32-27 victory over the US in their opening Group IV fixture of the main round in the 28th International Handball Federation (IHF) Men’s Handball World Championship, currently being co-hosted by Poland and Sweden.

The nationals clinched their first-ever victory in this stage of the competition, in which they are appearing in for only the second time in the history of their participation in the worlds. The Bahrainis held a 17-13 lead at the half and did well over the final 30 minutes to maintain their advantage.

With the result, the nationals improved to four points from two wins and a loss on their division standings. Their triumph against Belgium from the preliminary stage and loss to defending world champions Denmark were carried over to this phase, as per tournament rules.

Coached by Icelandic tactician Aron Kristjansson, the nationals are hoping to finish amongst the top two in Group IV to book a berth in the quarter-finals, but they face mammoth challenges in their last two games of the main round.

They next go up against African powerhouses Egypt tomorrow before locking horns with European juggernauts Croatia on Monday. Bahrain’s game last night was played at Malmo Arena in the Swedish city of Malmo.

The Bahrainis got off to a strong start. After Ty Reed brought the Americans to within 4-6, Bahrain scored four unanswered goals to take a 10-4 advantage. In the second half, the US were determined to chip away at the deficit and got to within a single goal, 20-21, following an Alexandre Chan Blanco penalty shot nearing the period’s midway point.

But the nationals did well to respond, going on a 6-1 rally with conversions from Mohammed Mirza, Mohammed Habib Mohammed, Ahmed Fadhul and three from skipper Hussain Al Sayyad, who was in fine form.

The Americans never recovered from there and got no closer than four goals the rest of the way. The Bahrainis enjoyed their biggest lead of the contest of seven twice late on, both with efforts from Al Sayyad. The feisty national team captain finished as the game’s leading scorer with 11 goals.

Mohammed and Fadhul each contributed five in the win, while Ali Eid and Hasan Mirza scored three apiece. Mohammed Mirza and Mahmood Mohammed chipped in with two goals each for Bahrain, while Hassan Al Samaheeji rounded off their scoresheet with a goal to his name.

Bahrain goalkeeper Mohammed Abdulhussain also put in an impressive performance. He finished with 17 saves for a monster effort in a second successive contest. Samuel Hoddersen was the top scorer for the US in the loss with six goals. Chan Blanco and skipper Ian Hueter finished with five apiece.

The US posted their third loss on the Group IV standings, as their two defeats from the preliminaries were carried over. They have been eliminated from contention for the last eight. Bahrain’s game tomorrow against their Egyptian counterparts is scheduled for a 5.30pm start at the same venue.