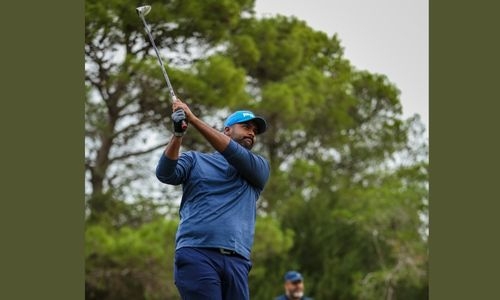 Bahrain wrapped up their fantastic campaign yesterday in the 41st Pan Arab Men Golf Championship by finishing fourth overall in the teams’ competition while boasting three players in the final individual rankings’ top 10.

The host Tunisians were crowned team champions after finishing the four-day tournament with a total of 898 strokes from their top three players. Egypt followed as the silver-medallists with a 916 score, while Saudi Arabia took the final podium place and the bronze medals with a 925 total.

In the individual classification, Al Hakam was Bahrain’s best finisher in seventh with a 23-over-par 311 total score from the four rounds.

He carded a five-over 77 yesterday over the last 18 holes, completing a consistent performance that saw him score 77, 79 and 78 over the first three days.

Al Zayed followed in eighth place after going just one shot behind Al Hakam. He had an eight-over-par 80 yesterday to go with his other totals of 81, 75 and 76 for the 312 overall.

Al Merisi was a further four shots back with a 28-over-par 316 total from four rounds.

He carded a 77 yesterday, adding to his other scores of 84, 75 and 80. Bahrain’s fourth player in the competition, Khalifa Duaij Al Kaabi, finished ranked 15th from the 48 players who started the event.

Elyas Barhoumi was crowned champion, ensuring that the home team Tunisians came away with a championship double.

Barhoumi was a class above the rest of the field, finishing as the only player to go below par.

Saaoud Abdallah Al Sherif from Saudi was the individual silver-medallist after completing the event three shots behind.

Issa Abu El Ela from Egypt clinched the bronze with a four-over 292 total, playing an even-par 72 over the final 18 holes.

The tournament took place under the umbrella of the Arab Golf Federation, and was sanctioned by The R&A.