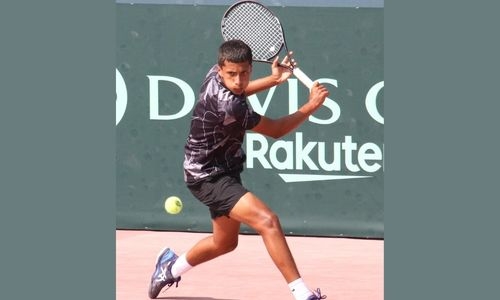 Players from all across the continent are competing in the tournament, which features singles and doubles categories for both boys and girls. Varun Singh from India is set to be the top seed amongst the boys.

Also set to be competing are Abdulrazzaq Al Henabi from Saudi Arabia, Ali Buabbas from Kuwait, Maxwell McLaughlin from Canada, Issah Ali from Great Britain, Minato Abe from Japan, Javan Leamy from Malaysia and Nyall Thoppil from the Philippines, to name a few.

Amongst the girls, Yasmina Fatihova from Uzbekistan is set to be the number one seed, while other top entrants are Hajar Zaidan from Bahrain and Aisha Al Busaidi from Oman.

Commenting ahead of the start of the ATF event, BTF president Shaikh Abdulaziz bin Mubarak Al Khalifa expressed his best wishes to all the participating players, especially those coming from overseas for a pleasant stay in the Kingdom.

Shaikh Abdulaziz said that the tournament is an important occasion as it provides young Bahraini players to gain experience against talented youngsters from different countries.

It also cements Bahrain’s status as a top destination for regional, continental and international tennis events.

The ATF tournament follows the Kingdom’s successful hosting of three successive International Tennis Federation (ITF) tournaments, held in as many weeks during October and November.