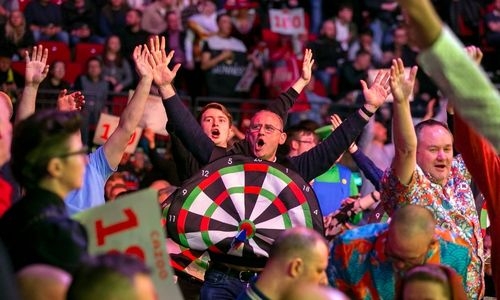 Bahrain International Circuit (BIC), “The Home of Motorsport in the Middle East, announced yesterday its incredible limited-time-only discount of 15 per cent off on general admission tickets to the first-ever Bahrain Darts Masters.

Celebrating the spirit of the FIFA World Cup, the discount period will last for the duration of the tournament, meaning that until 18 December, general admission tickets are available from just BD 21.25 for a two-day ticket.

The prestigious event, which will be making its highly anticipated debut in the Kingdom on 12 and 13 January next year at BIC, will showcase the world’s best players in the PDC World Series of Darts.

The Bahrain Darts Masters will mark the opening round of the world series’ 2023 calendar.

For the two-day event, the Dome tent at BIC will be transformed into a darts venue, taking inspiration from the world-renowned Alexandra Palace in London, the home of the World Championships.

Fans can expect an atmosphere like never seen before in Bahrain, with a wide food and beverage offering, amazing darts entertainment and the inevitable fancy dress outfits.

Tickets to the Bahrain Darts Masters start at BD21.25 for General Admission for the two days.

BIC is offering its discount of 15 per cent for both General Admission and Premium tickets. Fans are urged to book quickly as the venue has limited capacity and to take full advantage of BIC’s fantastic deal.

The Bahrain Darts Masters will be broadcast live to a TV audience reaching over 200 million people in more than 185 countries worldwide.

Darts is the second mostwatched sport in the UK after football and is best known for the hosting of the World Darts Championship, which attracts a crowd of over 90,000 people to Alexandra Palace in the UK every year across the Christmas and New Year period.

For more information on the Bahrain Darts Masters, visit bahraingp.com or call the BIC Hotline.