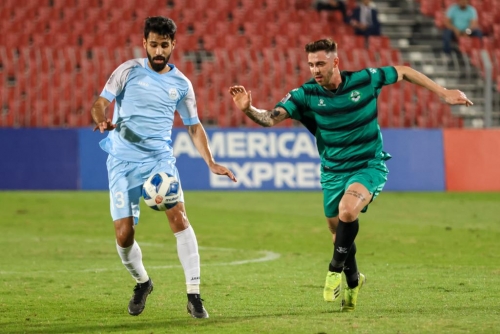 Meanwhile, also last night, leaders Muharraq were held to a goalless stalemate by Bahrain Club. In Riffa’s win, Bahraini internationals Jassim Al Shaikh and Mohammed Jassim Marhoon were both on target in the second half.

Riffa improved to 10 points from five games after claiming their third triumph. They moved to within a point from Muharraq, who had a three-point lead ahead of their rivals heading into yesterday’s play. After both teams failed to find the net in the first half, Riffa took the lead against Budaiya six minutes after the hour-mark with an Al Shaikh strike from inside the penalty area.

Al Shaikh tried to play a pass to teammate Mohammed Al Rumaihi to his right, but it was stopped by the defender. The ball rebounded onto his path in a perfect position for Al Shaikh to unleash a low effort from the edge of the six-yard box, which went to the bottom-left corner of goal.

Then, 11 minutes later, Marhoon doubled Riffa’s advantage with a header from the left of goal. He was on the receiving end of a cross from right of the box supplied by substitute Jassim Hamdouni, and an unmarked Marhoon made no mistake with his attempt.

That sealed the win for Riffa and handed Budaiya their third loss in five outings. They remained on two points in last place on the 12-team league table. In last night’s other game, Muharraq were frustrated by a battling Bahrain Club as the two teams took a share of the points following a tense encounter.

It was Muharraq’s second draw in fix games as they improved to 11 points to stay atop the standings. Bahrain Club also had their second tie but they went to just five points in the bottom half of the table. League action continues tonight with three matches on the cards. At 5.30pm, Al Ahli take on Al Hala while at 6.30pm Al Shabab face off with Manama. Then, at 8.30pm, East Riffa and Al Khaldiya lock horns in an exciting late encounter.