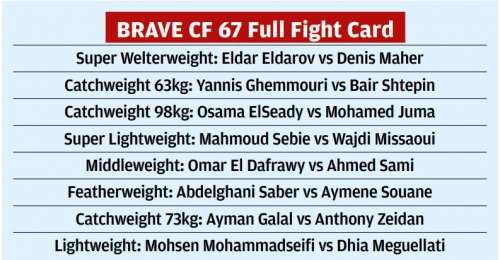 The BRAVE CF 67 fight card is locked and loaded as the penultimate event on the 2022 BRAVE Combat Federation calendar will take place in Bahrain on December 12th.

BRAVE CF 67 will be a special closed show for BRAVE TV featuring the top Arab athletes from around the region as they fight for an opportunity to walk in the footsteps of legendary figures such as former BRAVE CF world champions Jarrah Al-Silawi (Jordan) and Mohammad Fakhreddine (Lebanon).

Adding to the allure of BRAVE CF 67 is Mahmoud Sebie. A world-renowned Greco-Roman wrestler from Egypt, he will become the first Olympian to fight for BRAVE CF when he takes on Tunisia’s Wajdi Missaoui in a Super Lightweight bout.

Lightweights Mohsen Mohammadseifi and Dhia Meguellati will kick start the exciting event. Iran’s Mohsen had a memorable BRAVE CF debut when he stopped Morocco’s Bichi Zakaria at BRAVE CF 48. The Iranian, who’s a five-time wushu sanda world champion, has the chance to build on his first-ever pro win when he meets Algeria’s Meguellati, stepping into the BRAVE CF cage for the first time this month.