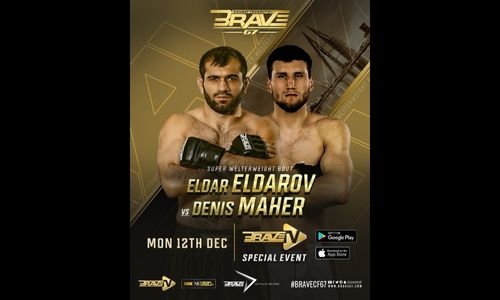 BRAVE Combat Federation will see the return of MMA royalty as Super Lightweight champion Eldar Eldarov will once again step into the cage at BRAVE CF 67, in a Super Welterweight bout for a special BRAVE TV event taking place on December 12th.

Eldarov will face Belarus’ Denis Maher in the main event of the evening for the penultimate card of the 2022’s BRAVE CF calendar.

Eldarov is riding an incredible 12-fight win streak, with his only loss ever coming against Khabib Nurmagomedov - more than ten years ago.

Maher - yet to be beaten in his professional career - will make his second BRAVE CF walk following his stoppage win over Kazakhstan’s Rinat Sagyntay at BRAVE CF 51.

In the co -main event, France’s Yannis Ghemmouri aims to continue building on his successful BRAVE CF debut when he meets Russia’s Bair Shtepin in a 63-kilogram Catchweight bout.

BRAVE CF 67 will be a closed show featuring the top Arab athletes from around the region.

Five days after the show, the promotion will wrap up the year with a return to Germany on December 17th for BRAVE CF 68, which takes place in association with NFC.