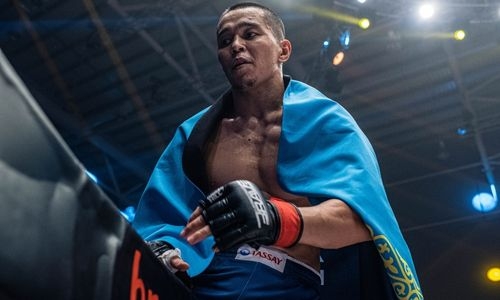 BRAVE CF Flyweight star Asu Almabaev has only one thing on his mind heading into BRAVE CF 66, which goes down in Indonesia, on November 26th.

And that is to be a champion.

Upon arriving in Bali, the number-three ranked BRAVE CF Flyweight sent out a simple yet powerful message to BRAVE Combat Federation.

“I want the title fight next,” said the Kazakh, who will be facing the unbeaten Filipino MMA athlete and BRAVE CF debutant Kenneth Maningat in the co-main event of the evening.

Almabaev was set to face Bahraini star and former amateur world champion Muhammad Idrisov, but he suffered an injury and had to withdraw from the colossal Flyweight bout.

A late change in opponent is never an easy situation to deal with, especially when the stakes are so high, however, Almabaev is looking forward to the new challenge.

‘’This fight will be good. It’s a nice match-up.

Kenneth is a striker and I’m a wrestler, so it’s a good mix,” says Almabaev who had an unforgettable 2021.

His rear-naked choke victory over Aleksander Doslkalchuk back at BRAVE CF 53 earned him two BRAVE CF Awards: Submission of the Year and Breakthrough Fighter of the Year.

He beat Imram Magaramov at BRAVE CF 57 before collecting the biggest win of his mixed martial arts career by edging Zach Makovsky at BRAVE CF 60.

He now looks to continue on that upward trajectory post-November 26.

“The next thing I want after this fight is the belt, it’s the title shot. Give me the belt,” added Almabaev who wants a crack at the vacant BRAVE CF 125-pound belt.