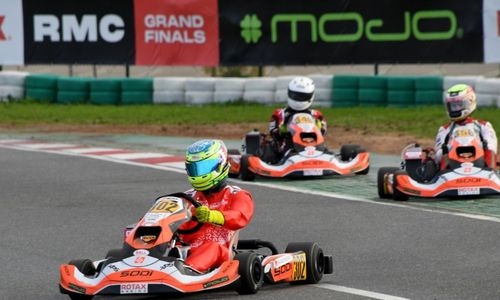 Best of the team was 14-yearold Muhammad Wally, who was second quickest in Junior MAX qualifying, earning him a frontrow start for the Heat Races.

Tricky conditions prevailed throughout the first few days as rain fell lightly over the Algarve, wetting the track at times to provide an extra challenge for non-Europe-based drivers.

Nevertheless, Team Bahrain’s talents embraced the conditions and put it down to valuable experience amongst the 394 drivers from the 60 nations represented at this edition of the event, which has run for over two decades.

Elsewhere amongst Team Bahrain’s participants, Yousif AlGhaith in the Micro MAX class was 33rd in qualifying, Khaled Najjar in the Mini MAX was 23rd, Najashi Rashdan came 28th in the Junior MAX and Sulaiman AlKandari was 35th amongst the DD2 participants in qualifying.

He said: “We knew our Team Bahrain drivers had to dig deep this week as the weather has played an important role, and will probably continue to do so.

The drivers can now build toward the Pre-Finals, with the potential to move up the order in the Heat races.

“Best performer so far was Muhammad Wally, showing strong pace and always among the pacesetters during practice, then delivering a sparkling performance when it mattered in qualifying, setting himself up for top starting places on the grid for the forthcoming Heat races.

Yesterday at Kartodromo do Algarve saw the start of Qualifying Heats to determine positions for the Pre-Finals tomorrow, with the all-important Grand Finals on Saturday.