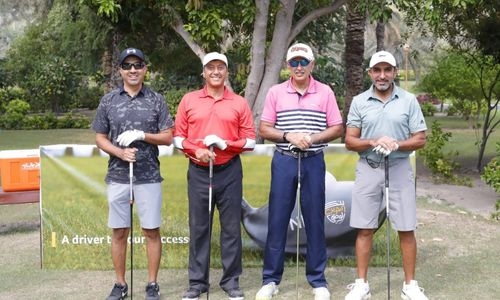 AMH Saar 1 were the top team yesterday on the second day of the 23rd Annual AMH Island Classic Charity Golf Tournament, which is being played on the private golf course of His Majesty King Hamad bin Isa Al Khalifa, the patron of the tournament.

Gulf Air 2 were the second-placed team in the championship flight, while Mohammed Jalal came third.

In the premier flight VGA 2 were the top team, while KHAMH 1 were second and EK Kanoo 1 third.

After two days, Riffa Views, AMH Saar 1 and Gulf Air 2 were the top three teams in the championship flight, while Saffriya 1, VGA 2 and KHAMH 1 were the leading trio in the premier fight.

Prizes for the championship and premier flights will be presented to the overall winning teams following the full three days of play at an event to be held at the Diplomat RadissonBlu Hotel and Spa.

Amongst the side contests, in Flight C, Rajeev Gogia of Ghostbusters was the winner of the closest-to-the-pin side contest on hole two.

Michael Barwick of VGA 1 won the most accurate drive on hole eight, while Agdas Ahmed of AMEX 2 won the longest putt side contest on hole four.

In Flight D, Ronan Armstrong of RGC 1 won the closest-to-thepin side contest on hole two.

Salah Abdulla of Mohammed Jalal claimed the most accurate drive on hole eight, while Sanjeev Bhalla of KHAMH 1 won the longest putt side contest on hole four.

American Mission Hospital (AMH) CEO/CMO Dr George Cheriyan said: “The excitement level is very high, especially with the golfers coming back to this unique course after a gap of two years during which the pandemic prevented us from holding the event.

“All the teams are trying their best to win this coveted title.

There are two flights—the championship and the premier—and we will have three winning teams from each flight.

“The logic of having two different flights is to ensure that every team has a chance at winning the titles irrespective of their handicaps.”