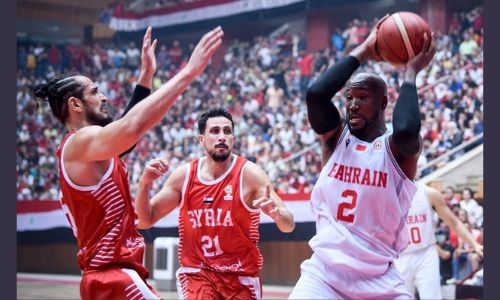 Bahrain kept their hopes alive in the qualifying competition for the FIBA Basketball World Cup 2023 following an upset 76-67 victory over Syria last night at Al Hamadaniyeh Stadium in Aleppo. The Bahrainis gave up a 20-point first-half lead but managed to hold on to their advantage in the game’s closing stages to come away with the all-important result. It was the first win for the nationals after five tries so far in Group D of continental qualification.

They avenged their earlier loss to the Syrians in their first meeting in Bahrain held in February of this year. Bahrain play one more game in the qualifiers on Monday against Kazakhstan in Astana. They must win that contest and hope Syria lose against Iran the same evening to have any chance of advancing to qualifying’s next round.

Only the top three teams in each of the four groups in Asia march through. The Kazakhs, who are undefeated so far after their 68-60 win over Iran in yesterday’s other Group D game, are already moving forward, along with the Iranians. Natualised big man Wayne Chism led all Bahrain’s scorers with 20 points.

He also had seven rebounds and four blocked shots. Court general Ahmed Hassan Aldurazi added 18 including an impressive five three-pointers. He did well to orchestrate Bahrain’s offence and control the tempo of the game. Brothers Mustafa Hussain and Ali Hussain provided a welcome spark off the bench, scoring 11 and eight points, respectively, while Maitham Jameel and Mohammed Ameer had seven points each.

Jameel also dished out a superb 12 assists. Subah Hussain rounded off the national team’s scoresheet with four points. Bahrain roared to a brilliant start and led by as many as 20 points in the opening half. They raced out to a 6-0 lead and then enjoyed their first double-digit advantage, 13-3, following a Jameel three-pointer.

They ended the first quarter ahead 20-8 and then continued to widen the gap in the second. An Ameer three-pointer from the left corner, a Mustafa Hussain fast-break lay-up and then a two-handed slam dunk by Chism then put them up 29-10. A Jameel triple later gave them a 32-12 cushion midway through the period, which helped the Bahrainis take a 39- 27 lead into the break.

The Syrians, however, clawed their way back in the second half. The home side were able to cut Bahrain’s lead to single digits in the third, but a late three-pointer in the quarter by Ali Hussain gave them some breathing room heading into the final canto up 54-48.

Back-to-back baskets by Chism and Ali Hussain from beyond the arc then gave the nationals a 60-48 lead at the start of the fourth, and then jump shots from Subah Hussain and Chism made it 66-51.

Syria threatened once again but an Ali Hussain fast-break lay-up restored the Bahrainis’ 13-point lead. The home team continued to fight until the end and came to within single digits with under two minutes to go. But Bahrain had the answers in the closing stages and were able to close out the nine-point win with an Aldurazi triple.