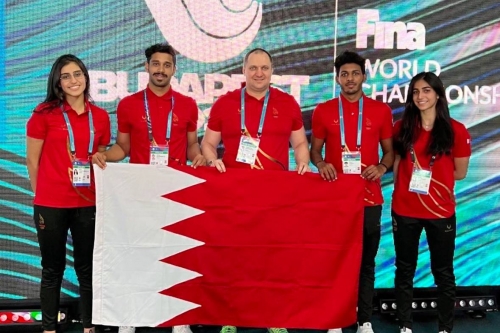 Bahrain swimmers Noor Taha, Omar Al Rowaila and Saud Ghali all won their respective first round heats at the 19th FINA World Championships 2022, currently being held in Budapest. The three youngsters are part of a four-member national team that is competing at the worlds.

In the women’s 100m backstroke heats, 16-year-old Noor completed her race in one minute 09.28 seconds. She had a reaction time of 0.59 seconds. Taking the runner-up spot was Ariuntamir Enkh-Amgalan of Mongolia 01.03 seconds behind, while Aynura Primova of Turkmenistan came third 03.77s back.

The leading swimmer in the heats was Regan Smith of the US, who qualified for the semi-finals with a time of 58.31s. Sixteen in all made it through from the five heats. Analia Pigree from France was the last qualifier in 1:01.13.

On the distaff, Al Rowaila clinched first place in his men’s 100m backstroke heat with a time of 1:00.03. He had a reaction time of 0.64s. The 18-year-old Bahraini finished 01.43s ahead of Mekhayl Engel of Curacao, while Benjamin Ko of Guam came third 02.63s off Al Rowaila’s winning pace.

The fastest of 16 qualifiers in the event was American Hunter Armstrong in 52.81s, while Ole Braunschweig of Germany was the last to make it through in 54.22s. Also competing for Bahrain, Ghali won his men’s 100m breaststroke heat.

He clocked a time of 1:06.46 with a 0.66s reaction time. The 17-year-old finished 01.33s ahead of Zandanbal Gunsennorov of Mongolia, while Jion Hosei of Palau came third 12.05s behind. Arno Kamminga of the Netherlands was the top swimmer to advance with a time of 58.69s, while Kristian Pitshugin of Israel was the last to qualify in 1:00.70.

Noor, Al Rowaila and Ghali are expected to compete in another event at the world championships. Joining them at the meeting are fellow-swimmer Ayah Bin Rajab and Bahrain national team head coach Alex Karpalev. The Bahraini delegation at the Hungarian capital is headed by Bahrain Swimming Association board member and secretary general Ahmed Abdulghaffar.