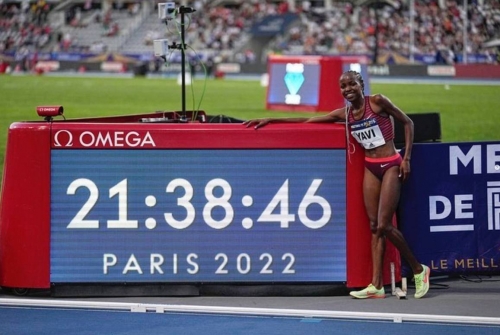 Not only did the world-class distance specialist claim an impressive victory, Winfred also set the world leading time as well as a new personal best. Winfred was clearly in a class of her own as she powered to an incredible result, running solo after dropping the pacemaker to win in a time of eight minutes 56.55 seconds.

That mark was the fastest in the women’s 3,000m steeple-chase this season, eclipsing the previous quickest time of 8:57.97, set by Norah Jeruto of Kazakhstan at the Prefontaine Classic in Eugene, Oregon, in late May.

It was the second successive run in less than a month where Winfred set a new personal best—both times under nine minutes. The 22-year-old had earlier gone for an 8:58.71 in her previous run, which also came at the Prefontaine Classic where she was the runner-up to Jeruto.

Following her race, an elated Winfred commented: “It’s incredible. Winning tonight in Paris, with a world lead, that’s something I did not think I would be capable of. “To be honest, I still cannot believe it.

But I’m in a good shape, that’s the second time this season I run under nine minutes. That’s great. I’m so happy.” Of the race conditions, she said: “It was hot, really hot, but that’s not the first time I run with this kind of weather. I don’t say I get used to that, but I did it already.”

Winfred is currently preparing to go for gold at the World Athletics Championships, also to be held in Eugene, in July. She said that the Paris Diamond League event was her last participation prior to the worlds.

“Now I need to rest and train before the Worlds championships, so, no more race before Eugene,” she explained. Winfred’s scintillating performance in Paris saw her finish around 12 seconds ahead of her closest challenger Sembo Alemayehu of Ethiopia, who had a mark of 9:09.19.

Mekides Abebe, also from Ethiopia, was third in 9:11.09. A total of 11 world-class athletes, including the pacemaker, took part in the run. Aminat triumphs Meanwhile, also late on Saturday night, Bahrain’s Aminat Jamal claimed a fine victory in the women’s 400m hurdles at the Meeting International EAP in Nivelles, Belgium.

She had previously finished second in the same event in a meeting in Slovakia with a time of 57.25s, and then took another runner-up classification in Italy with a time of 57.36s. Aminat is also preparing to compete for Bahrain at the upcoming worlds next month.