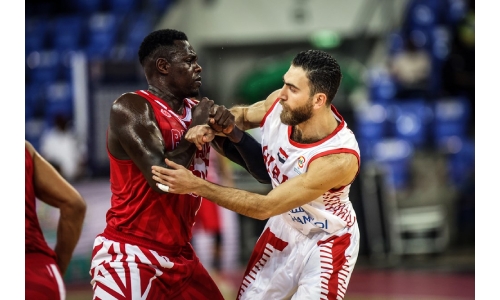 Bahrain were dealt a disheartening 64-80 home loss to Syria last night in their Group D qualifier for the FIBA Basketball World Cup 2023, played at the Khalifa Sports City arena in Isa Town. The nationals struggled coming out of the gate and only scored their first basket of the game after five-and-a-half minutes from the tip. They fell behind 2-12 and only posted seven points in the entire opening period. They tried valiantly to fight back with a better second-half showing, but the Syrians were too strong on the night.

The Bahrainis never led and fell behind by as many as 31 points en route to the final buzzer. “Today’s game was tough,” said Bahrain head coach Sam Vincent in his post-game Press conference. “We came into game knowing they are big and have a lot of experience and more international exposure than we do.

In that kind of situation, we felt if we play well and control the tempo, control our shots and have low turnovers, we would have a chance to be there, but tonight it didn’t go that way. “We’re disappointed. The main thing for us is to continue to learn what international basketball is and how tough it is. “We’re usually smaller than our opponents, but if we are scrappy and play hard, we can have a chance.” Syria head coach Javier Juarez commented: “We won the game in the first two quarters.” The loss put a dent in the Bahrainis’ qualification bid midway through this stage of the process. The nationals must finish amongst the top three in their group to earn a place in the second round of qualifying but are now in last.

Bahrain must bounce back in their next game on Sunday, but their opposition doesn’t get any easier as they take on visiting Kazakhstan, who stunned Iran 73-69 in Tehran in yesterday’s other Group D contest. “We have a tough game coming up against Kazakhstan, and now we have to re-focus, dig a little deeper and be ready to play,” Coach Vincent added. Kazakhstan’s win maintained their undefeated record in three games so far, while it handed the Iranians their first loss after previously registering two big wins against Bahrain.

Kazakhstan moved into solo first place on the group table, while the Iranians and Syrians follow in second and third, respectively. Bahrain fell behind 7-19 at the end of the first quarter and then were down 19-39 at the half. They nearly matched Syria point for point in the third but were still in a 41-62 hole heading into the final canto, where they were able to outscore their rivals by five, 23-18, but the game was already virtually decided.

Maitham Jameel and Hesham Sarhan combined for 34 points for Bahrain and had seven three-pointers between them. Jameel top scored with 18 while Sarhan had 16. Mohammed Ameer contributed 14 points as their only other player in double figures. CJ Giles had eight points and 11 rebounds, while Ahmed Akber had four points. For Syria, Amir Jabbar Hinton had a game-high 36 markers. Anthouny Bakar added 12.

Bahrain’s home games against Syria and Kazakhstan are part of the second window of play in World Cup qualification. The third and final window will be in July, when Bahrain take on Syria in Damascus on July 1 before playing Kazakhstan in Nur-Sultan on July 4.