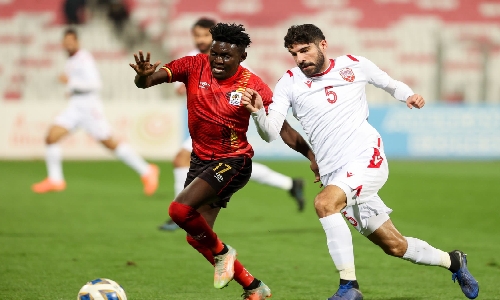 Sporting an all-new national team kit, the hosts gave up an early goal but did well to battle back to come away with the well-deserved victory.

On target for the Bahrainis were Mahdi Abduljabbar, Ebrahim Al Khattal and Abdulla Duij.

The game was part of Bahrain’s ongoing local training gathering, which continues until Tuesday.

The nationals are preparing for their upcoming competitions, which include the third round of qualification for the AFC Asian Cup 2023, which will be held in June.

The Helio Sousa-coached squad is set to play another friendly against top African opposition.

They next play DR Congo on the last day of their gathering.

Both of their exhibition opponents are classified higher on the current FIFA World Rankings, with Uganda 82nd and DR Congo 64th.

The Ugandans opened the scoring in the ninth minute when forward Karisa Milton headed home from close range off a cross from the right-wing.

Milton did well to place his effort to the left of the net, over the outstretched arm of Bahrain goalkeeper Sayed Shubbar Alawi.

Bahrain was then able to equalise in the 25th minute when Uganda goalkeeper Benjamin Ochan was shown the red card for taking down Bahrain’s Al Khattal in the box.

Abduljabbar stepped forward to take the kick, and he made no mistake sending the ball home to the top-left corner of the net.

The match headed into the break deadlocked at 1-1.

But just nine minutes after the restart, Bahrain went ahead through Al Khattal, who pounced on a loose ball right in the face of goal and sent it home.

A cross from Ahmed Abdulla was inadvertently sent towards goal by Uganda midfielder George Kasonko, and substitute goalkeeper Watenga bin Abdulrashid needed to make a diving save.

The ball went directly towards Al Khattal, who sent it to the roof of the net.

The nationals then applied the final nail in the coffin in the 88th minute, when Duij headed in from close range off a cross from outside of the penalty area by teammate Ali Madan.

The Bahrainis are set to be one of 24 national teams competing in the third stage of qualification for the AFC Asian Cup 2023.

These teams are to be divided into six groups of four to play a single round-robin.

The group winners and the best five runners-up across all groups will qualify for the Asian Cup, where they are joined by China and by the 12 teams which qualified directly from the second round.

The Bahrainis have yet to learn of their groupings for their upcoming third round of qualifying for the AFC Asian Cup 2023.

The draw is scheduled to be held on February 24. Matches will be played over three days in June, including on the 8th, 11th and 14th.

It was announced by the AFC that each group will hold their games in a centralised venue, and a bidding process will be held for the hosts.