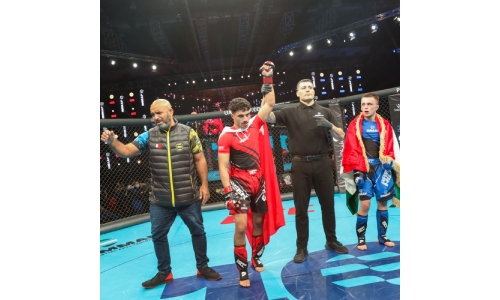 Bahrain is set for gold windfall today and tomorrow as nine fighters have qualified to the finals of the IMMAF World Champions, the amateur mixed martial arts event that is being held in Abu Dhabi this year.

Today, Gadzhi Gaziev and Mohamed Alsameea will attempt to become the first world champions for Bahrain this year as they fight in the junior finals in their respective weight classes.

Tomorrow, other seven finalists from Team Bahrain will attempt to earn gold medals for the nation, namely Aieza Ramos, Beatriz Consuli, Raiane Guimaraes, Kurban Idrisov, and Rasul Magomedov, as well as reigning world champions Sabrina Sousa and Ramazan Gitinov, who will be going for their second gold medals.

Team Bahrain brought in 23 fighters to the world championships, and despite suffering from injuries, has shown the tremendous commitment of KHK MMA under the vision of His Highness Shaikh Khaled bin Hamad Al Khalifa, to earn 14 medals - with five bronze guaranteed and a potential nine golds to come.