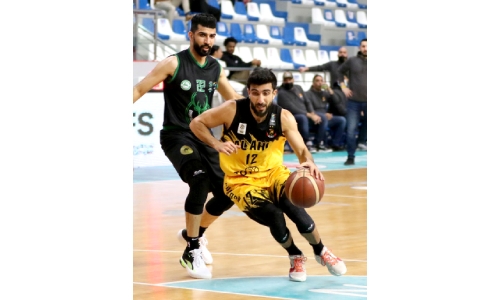 Ahli battled back from an early deficit to defeat Bahrain Club 93-81, as did Muharraq against Al Najma in a game they won 96-89.

Both quarter-final contests were played at Zain Basketball Arena in Um Al Hassam.

Ahli moves on to face Nuwaidrat in the last four, while Muharraq next battle arch-rivals are Manama.

The semis have yet to be scheduled by the Bahrain Basketball Association.

In Ahli’s win, Bahrain Club had the upper hand at the end of the first period after building a 28-22 lead.

But a 31-16 second quarter in favour of Ahli turned the game around, although Bahrain Club kept things close after three quarters, with Ahli narrowly ahead 69-66.

Bahrain Club could not recover, and Ahli did well to hold on to the advantage until the final buzzer.

Maitham Jameel top-scored for the victors with 24 points. Hesham Sarhan chipped in with 17 coming off the bench, while Jamaican professional Adrian Uter chipped in with 14 points and seven rebounds.

Nasser Almosawi added 19 including five three-pointers, and Ali Abbas had 17.

Meanwhile, Muharraq used a strong second quarter where they outscored Najma 33-19 to turn a 21-24 deficit after the opening period to a comfortable 54-43 advantage at the break.

Najma tried to stay within striking distance in the second half and trailed 63-72 after three, and in the final canto got to within five points thrice, but came no closer.

Canadian import Shane Osayande led Najma with 29 points and 17 rebounds in the loss.

Ali Jaffar chipped in with 22 including five triples, while Mohammed Buallay had 17 points, six rebounds and 10 assists.