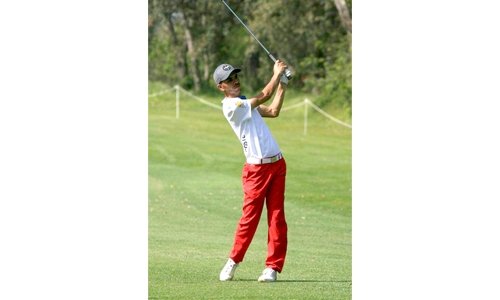 Karim Elhali from Morocco took the overnight lead yesterday after the first round of this year’s King Hamad Trophy golf championship, which got underway at The Royal Golf Club (RGC).

Elhali played a five-under-par 67 over the competition’s opening 18 holes to take the top of the leaderboard by a single stroke. He enjoyed a strong start with four birdies in the front nine, before adding another two heading back into the club but also carding one bogey.

Finishing the first day behind him in tied-second were Scotsman Rory Tinker and Swede Jesper Alm on similar four-under-par 69 totals.

Tinker, RGC’s PGA professional, had an eagle on hole 10 but also shot a bogey with his three birdies, while Alm had an impressive seven birdies but also three bogeys.

A further one shot behind in tied-fourth were Joshua White from England and Ayoub Lguirati from Morocco, while six players were tied sixth on two-under-par 70, including Louis Campbell, defending champion Luke Joy, Ahmed Marjan, Marc Boucher, Sam Hobday and Jake Ayres.

Boucher from Ireland was the leading amateur on yesterday’s standings.

Rounding off the players with scores below par were Zane Scotland and Daniel Owen.

They finished tied-12th having shot one-under-par 71.

He was tied-14th overall with four others on even-par scores of 72.

Alnoaimi was also the third-best amateur, ranked behind Boucher and Monty Scowsill.

Bahrain Amateur Open champion Khalifa Almerisi and Khalifa Daij Alkaabi were the second and third-best Bahrainis from day one in tied-19th, one shot over par.

A total of 90 golfers took to the fairways yesterday along RGC’s Montgomerie championship course for the start of the prestigious tournament, which is in its 13th edition.

There will be a cut after today’s second round for the leading 45 players and ties, who will compete over tomorrow’s final 18 holes.

The previous edition of the King Hamad Trophy was played in December of 2019.

Joy clinched the title then after storming back from six shots behind countryman Sean Towndrow to force a dramatic play-off.

He then beat Towndrow by just one stroke to clinch the coveted title after re-playing the par-four 18th.

The tournament is organised and run by the Bahrain Golf Association.