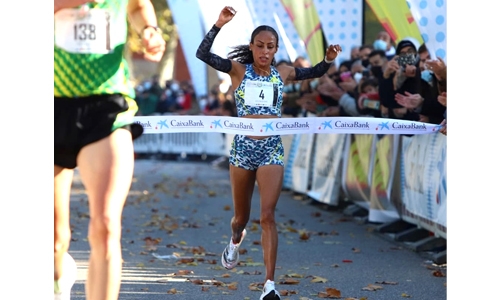 The event will be taking place December 12 along a 21.1-kilometre course in Zallaq. It is the biggest half-marathon in the world, according to the 2019 World Athletics ranking competition, with some of the most prominent global names in long-distance running taking part alongside a large number of enthusiasts of all ages and nationalities.

Kalkidan will be the lone Bahraini in the women’s category. She is currently in stellar form, having won two road races in Europe since clinching her silver medal in Tokyo in the women’s 10,000 metres on track.

In early October, Kalkidan set a new World Record en route to winning the Women’s Race at the The Giants Geneva 10K in Switzerland. She clocked a blistering mark of 29 minutes 38 seconds in the road race, in which she crossed the finish line nearly a minute quicker than her closest challenger. Kalkidan beat the previous World Record of 29:43 set by Kenya’s Joyciline Jepkosgei in 2017.

Then, earlier this month, she won the women’s race at the XLIV Carreira Pedestre Pupular do San Martino in Spain. Kalkidan completed the 10K run in 30:23 as she narrowly missed out on the overall podium.

This year’s Bahrain Royal Night Half-Marathon is a World Athletics Label Road Race that is part of the 2021 international calendar of the sport’s governing body.

Prize money will also be claimed by those placed fourth through 10th. Aside from the men’s and women’s half-marathons, there will also be a five-kilometre run for fun.

The half-marathon is scheduled for an 8 pm start, while the fun run will begin at 5.45 pm. The start and finish will both be at the Bahrain Royal Equestrian and Endurance Village in Zallaq.

Those participating will not need to worry about traffic, as, in accordance with World Athletics rules, the roads will be totally closed to facilitate the event. This year’s event is being sponsored by Tamkeen, the Bahrain Economic Development Board, Ahli United Bank, Bapco, Al Salam Bank, Aluminium Bahrain and Mohammed Jalal and Sons.