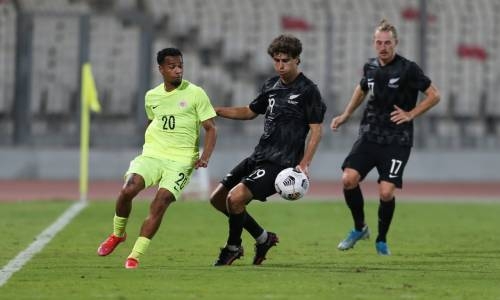 The game is scheduled for a 7pm kick-off and it will be played at the National Stadium in Riffa.

The tie will be the first meeting between the two sides since their infamous play-off for a spot at the 2010 FIFA World Cup, which the Kiwis won 1-0 on aggregate after home-and-away matches.

It will be the second tuneup for the Bahrainis in a week.

They previously played Caribbean side Curacao last Wednesday in a game they won convincingly 4-0.

New Zealand were also in action in the last few days against Curacao, winning their friendly 2-1.

Bahrain are using the friendlies as part of their preparations for their upcoming competitions, including the FIFA Arab Cup 2021 this November and December as well as the start of qualifying for the AFC Asian Cup 2023 early next year.

The FIFA Arab Cup 2021 will be held in Doha, with the participation of 16 national teams.

It will kick off on November 30 and continue until December 18.

Bahrain are in Group A, which also features hosts Qatar, Iraq and Oman.

Bahrain will be one of 24 teams from across Asia that will be competing in the AFC Asian Cup 2023 qualifiers, which will be in its third round.

The teams will be divided into six groups of four to play homeand-away matches.

The group winners and the best five runners-up across all groups will qualify for the Asian Cup, where they are joined by tournament hosts China and by the 12 teams which have already qualified directly from the second round.