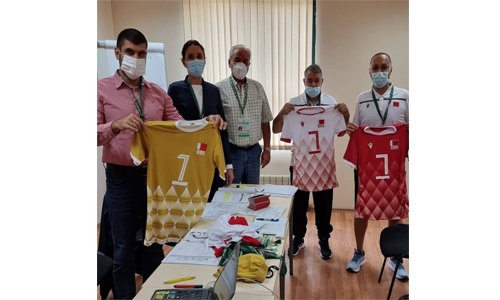 Bahrain begin their participation this evening in the FIVB Volleyball Men’s U21 World Championship 2021. The nationals open their campaign against tournament co-hosts Bulgaria, who are joined by Italy as the stagers of this year’s event. The Bahrainis take to the court tonight at 7pm.

Prior to the start of play, the three official uniforms that the national team will be using in the tournament were approved by the organising committee.

The nationals are in Pool B of the tournament’s preliminary round alongside Cuba, Poland and the Bulgarians. Following their game against Bulgaria, the Bahrainis take on Poland tomorrow before facing off with Cuba on Saturday. There are a total of16 nations taking part in the competition divided into four pools for this opening stage.

After a single round-robin, the pool winners and the pool runners-up will continue their quest for the medals in two new pools, while the remaining eight teams from two other pools to fight for the distribution of the places from ninth to 16th.

The matches in the four second-round groups will take place from September 27 through 29 and the pool standings will distribute the participants further into semi-final fixtures within the four different classification levels in the final standings.

The title, the rest of the medals and all remaining positions in the final standings will be determined on the last competition day on October 3.