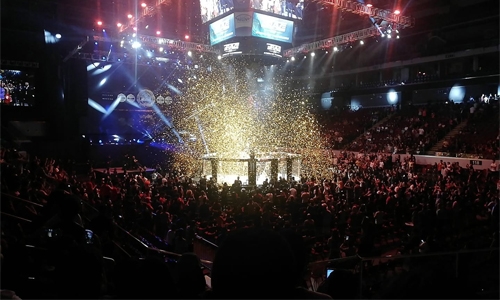 Since its emergence in the mainstream consciousness of the North American audience in 1993, mixed martial arts (MMA) has charted one of the most remarkable trajectories of growth that the world has ever witnessed in a sport.

Its influence has been very evident in the steadily increasing number of fans, primetime television spots, and packed arenas across the globe. One of the organizations that have been responsible for elevating MMA into a household staple is BRAVE Combat Federation, a brainchild of His Highness Shaikh Khalid bin Hamad Al Khalifa from the Kingdom of Bahrain.

On record, the only major MMA outfit to ever organize a show in Africa is BRAVE CF after seeing a demand in the region with the rise of Francis Ngannou, Israel Adesanya and Kamaru Usman, as well as a bevy of African up-and-comers such as Abdul Razak Alhassan, Abu Azaitar, Dalcha Lungiambula and Don Madge.

BRAVE CF made its foray into the continent thrice, hosting a fight card in Morocco in August 2018 before staging a debut event in South Africa nearly four months later and then returning to the country in December 2019. There is no mention if BRAVE CF will be going back to Africa this year as the focus is on extending its reach across Europe and in several parts of Asia. However, it remains a possibility.

BRAVE CF may have been the first one to test the African market, but many believe it is only a matter of time before every promotion will follow the trend.

The global outfit will look to add the 24th country on its list as the upcoming BRAVE CF 54 on Saturday, September 25th will mark its first-ever trip to Poland. In the main event, Amin “Fierceness” Ayoub of France will be defending his BRAVE CF Lightweight World Champion against Egypt’s Ahmed “The Butcher” Amir.