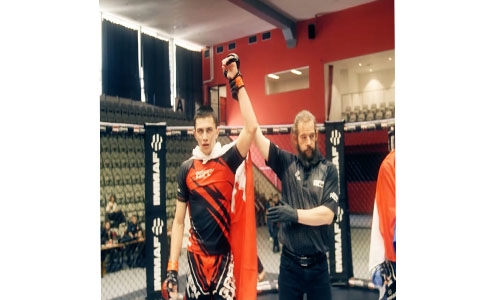 The Kingdom of Bahrain began its road to 100 medals in Prague with two pivotal victories and the momentum in favour towards the goal. After receiving a phone call from His Highness Shaikh Khalid bin Hamad Al Khalifa himself, the team was inspired and brought home two wins, through Gimbat Magomedov and Shamil Gimbatov.

While Shamil won’t be available in the next round through injury, Team Bahrain was set for seven more fights yesterday to move forward in its quest for 100 medals - with only four missing. In his second match-up of the tournament, Gimbat Magomedov was to face Ireland’s Emmet Corr in the Junior Lightweight division, while Abdulla Mubarak was set to make his debut against Marek Vyslouzil from the Cezch Republic in the Bantamweight class.

At Light Heavyweight, Magomedzagid Magomedov prepared to take on Robin Enotekio, from Sweden, and Murad Ibragimov was to face Slovenia’s, Samuel Skoda.

In the Flyweight division, Mohammed Almuamari and Mansur Magomedov were to represent the Kingdom against Ruslan Telibaiev, from Ukraine, and Ireland’s Gary Rooney, respectively.

Finally, at Heavyweight, Rasul Magomedov prepared to take on Oleksander Puliaiev, from Ukraine.