Koech suffers injury, out of Steeplechase | THE DAILY TRIBUNE | KINGDOM OF BAHRAIN 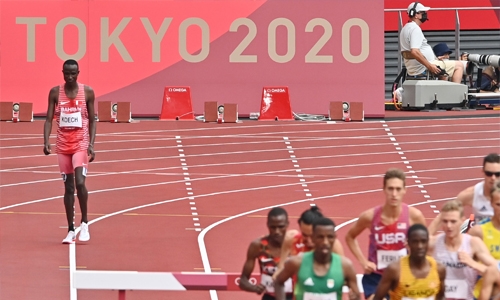 Bahrain’s elite athlete John Koech suffered an injury yesterday as he did not finish his heat in the Men’s 3,000m Steeplechase on day one of the athletics events at the Tokyo Olympics. Koech was the Kingdom’s first participant on the track at Tokyo’s Olympic Stadium, but he struggled from the very beginning and eventually limped off the track after one lap.

Lamecha Girma of Ethiopia won the heat in eight minutes 09.83 seconds, while Ryuji Miura of Japan was the runner-up in a new national record of 8:09.92. Benjamin Kigen of Kenya was third in 8:10.80 and was the last automatic qualifier for the final.

Koech was one of 15 runners to start the race. Bahrain’s campaign on the track continues today with sprinter Aminat Jamal set to compete in the Women’s 400m Hurdles. She will be in the first of five first-round heats.

She will be up against seven others and will need to finish in the race’s top four or be among the four fastest losers to advance to the semi-finals. Aminat heads into her run with a season’s best of 57.00 seconds but has a personal best of 55.12s. All but one of her rivals in today’s race have been quicker this year.

Koech and Aminat are part of Bahrain’s 13-member athletics team in Tokyo. The other men are Abdelrahman Mahmoud in the Shot Put, Al Siddique Mikho in the 1,500m, Dawit Fikadu and Birhanu Balew in the 5,000m, and the trio of Elhassan Elabbasi, Alemu Bekele and Shumi Dechasa in the Marathon.

The four other women are Winfred Yavi in the 3,000m Steeplechase, Kalkidan Gezahegne in the 10,000m, and the pair of Eunice Chebichii Chumba and Tejitu Daba in the Marathon.