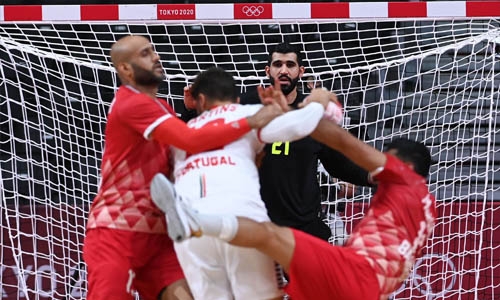 Bahrain faces their toughest test of the group stage in the men’s handball tournament at the Tokyo Games today when they take on reigning world and Olympic champions Denmark. The game is scheduled for a 3 am throw-off in the early morning, Bahrain time.

Following successive last-minute losses to Sweden and Portugal, the Bahrainis will be hoping to bounce back in their third Group B fixture but are the underdogs heading into the contest.

Denmark is unbeaten thus far, having crushed hosts Japan 47-30 in their first game and then following that up with a 32-27 win over Egypt. The Bahrainis lost to the Danes 20-34 when the two teams met earlier this year in the IHF World Men’s Handball Championship in Cairo.

In today’s other Group B games, Sweden and Portugal face off while Japan plays Egypt. Following today’s schedule, Bahrain next take on the Japanese on Friday in a game scheduled for a 5 am start, Bahrain time, followed by their last preliminary round fixture against Egypt on Sunday, also at 5 am.

Only the top four teams from each group move on to the knockout quarter-finals. Group A is currently led by France and Spain, followed by Germany, Norway, Brazil and Argentina.