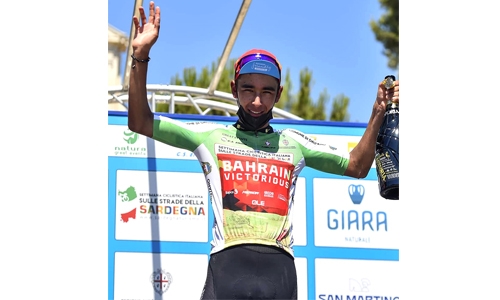 Buitrago managed to grab the jersey on stage four and defend the day after, brilliantly supported by four teammates. “I’m delighted with this result as that is the first jersey I won amongst the pro riders,” the 21-year-old Colombian said. “I’m also satisfied with my shape ahead of the second part of the season.

Today, I had to confirm the leadership of the KOM ranking and all my teammates helped me in succeeding. “We finished off the great job done by the team and I think we showed strong teamwork throughout the week.” Both the conclusive two stages started and finished in Cagliari, featuring the greatest difference in altitude (about 2,500m) on a penultimate day; while on the final, the peloton had to face a tough climb of seven km, to be repeated two times in 46km as the only two KOM of the day.

Atop the second climb at 101.4km of racing, Buitrago passed in the fifth position as the first rider of the group chasing the day’s breakaway. That was enough to secure the green jersey of the race.