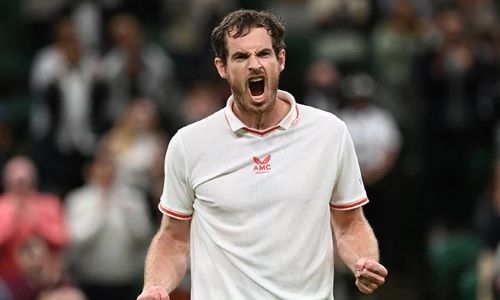 Two-time champion Andy Murray won his first Wimbledon singles match since 2017 on Monday with a four-set triumph over Nikoloz Basilashvili of Georgia.

“It has been extremely tough, even in the last few months,” said 34-year-old Murray.

“It was not the most serious of injuries but it was frustrating not to be able to get on the court.

“I have had so little momentum over the last few years but kept on going to the gym and trying to get back to do it again.” Now ranked a lowly 118 in the world, former number one Murray will face either Oscar Otte of Germany or France’s Arthur Rinderknech for a place in the last 32.

His last appearance in the singles tournament at Wimbledon four years ago ended in a five-set loss to Sam Querrey in the quarter-finals. A long-standing hip problem, which required surgery, then pushed him tearfully to the brink of retirement.

But three-time major winner and back-to-back Olympic gold medallist Murray said he intends to keep playing. “I keep on being asked will it be my last match or my last Wimbledon,” he said.

“I don’t know why I keep on being asked. I want to keep on playing. I enjoy it and I can still play at the highest level. “Basilashvili is ranked 28 in the world and I beat him.”

It was a roller-coaster evening for Murray who let slip a 5-0 lead in the third set.

That led to a delay in proceedings to allow for the Centre Court roof to close. But Murray broke in the first game of the fourth set to send him on his way to victory.

“It’s amazing to be back out here playing again on Centre Court,” he added.

Messi at the double as Argentina overrun Bolivia 4-1