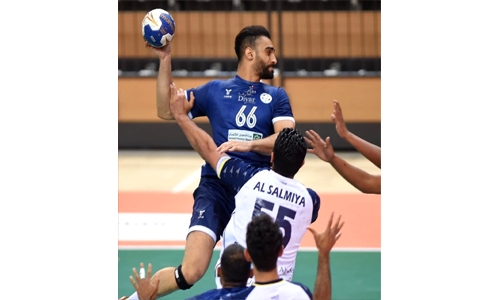 The win was the third in a row for the Bahrainis and it put them in second place in the Group A standings with a 3-1 win-loss record to end the competition’s first round. They now move on to the final four, where they are set to take on unbeaten Group B winners Al Duhail from Qatar.

Their semi-final clash is scheduled for tomorrow. The other semis contest is between Group A’s Qatari toppers Al Araqi and Group B runners-up Al Kuwait SC. Arabi are undefeated in four outings while Kuwait has a 4-1 mark. Najma seized control of their game with Alsalmiya yesterday from the first throw-off.

They took a quick 3-0 lead following a Mohamed Mohamed goal, which they extended to a 19-10 advantage at the half. The Bahrainis continued their fine play over the final 30 minutes and never let the foot off the gas.

Najma’s Mohamed Ahmed finished as the game’s top scorer with eight goals and was later named the Man of the Match. Mohammed Habib added another six in the win.

Mohamed and Kumail Mahfoodh each contributed four goals, while Bilal Askani and Hasan Alfardan both finished with three. Adel Afrooz and Abdulla Abdulkarim chipped in with two goals apiece, while Ali Eid, Husain Afrooz and Ali Ali completed the Bahrainis’ scoresheet with one goal each.

Mohammed Abdulhussan made five saves between the goalposts for Najma. Following tomorrow’s semi-finals, the winners move on to the gold medal match, which is scheduled for Monday. The losers face off for the bronze medals that same day.