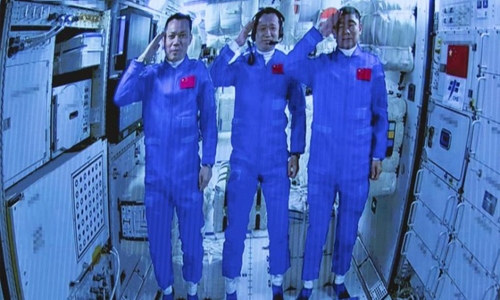 Three Chinese astronauts have begun making China’s new space station their home for the next three months after their launch and arrival at the station Thursday marked further advances in the country’s ambitious space program.

Their Shenzhou-12 craft connected with the station about six hours after taking off from the Jiuquan launch centre on the edge of the Gobi Desert said AP.

About three hours later, commander Nie Haisheng, followed by Liu Boming and space rookie Tang Hongbo, opened the hatches and floated into the Tianhe-1, the core living segment of the station.

China has now sent 14 astronauts into space since 2003 when it became only the third country after the former Soviet Union and the United States to do so on its own.

Although contact between the Chinese space program and NASA is restricted by U.S. law, NASA Administrator Bill Nelson issued a statement Thursday expressing, “Congratulations to China on the successful launch of the crew to their space station! I look forward to the scientific discoveries to come.”

The mission is the third of 11 planned through next year to connect the Tianhe-1 to two laboratory modules and send up crews and supplies. The current crew will carry out experiments, test equipment and prepare for future missions.

A fresh crew and supplies will be sent in three months. Each crew will have three members, with the station’s capacity at six, when crews are being exchanged. Two of China’s past astronauts were women, and future crews on the station will include women.

China landed a probe on Mars last month that carried a rover, the Zhurong, and earlier landed a probe and rover on the moon’s less explored far side and brought back the first lunar samples by any country’s space program since the 1970s.

China and Russia this week also unveiled an ambitious plan for a joint International Lunar Research Station running through 2036.

That could compete and possibly conflict with the multinational Artemis Accords, a blueprint for space cooperation that supports NASA’s plans to return humans to the moon by 2024 and to launch a historic human mission to Mars.