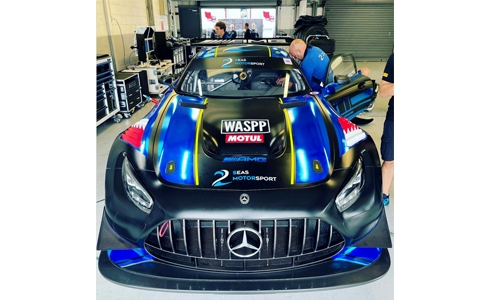 Bahraini-British racing team 2 Seas Motorsport have unveiled their new cars for the 2021 season and put them through their paces for the first time in testing in the UK. The team, co-owned by Bahrain’s talented racing driver His Highness Shaikh Isa bin Abdulla Al Khalifa, are set to compete in Europe running their all-new Mercedes-AMG GT3 EVO cars, and this past week they tested their new challengers at the world-renowned Silverstone Circuit.

The team has yet to announce its championships and drivers for their upcoming campaigns but said that details of their plans will be announced soon.

The team’s other co-owner Nick Cristofaro said on social media yesterday: “It has been a long winter of preparing and restructuring for the team, but we are now in a strong place and looking forward to being back out on track.

“When we started the team, we had a clear focus and ambition to make sure we were fully committed, and would only enter into something if we could be sure to deliver 100 per cent and achieve the absolute best results possible.

“We have worked on making sure we have everything in place to perform at the top of our game and plan to enter selected events in the coming months.

“These activities will be confirmed shortly, but we are also keen to talk to drivers who are looking at different opportunities for the latter part of the season.” The new Mercedes-AMG GT3 features a new design aesthetic, with an eye-catching front apron, distinctive flics, and a new front diffuser.

The new headlamps, auxiliary headlamps, taillights and the new rear apron also add to the racing car’s characteristic look. The car has a variety of assistance features for engineers and mechanics to make working on the car faster, easier and more intuitive, including a more easily adjustable front splitter and a fast-adjustment feature for the rear wing.

After launching the team at the start of last year, 2 Seas Motorsport initially debuted in the virtual world, finishing second in the inaugural SRO E-Sports Championship and an impressive fourth place overall at the 24 Hours of Le Mans Virtual.

They then contested in real-world motorsport, competing in the 2020 Intelligent Money British GT Championship, where they finished third in the GT3 Teams standings. Since then, the 2021 season has started in winning ways, with HH Shaikh Isa being a part of the driver line-up which claimed victory at the Gulf 12 Hours Bahrain, held in January at Ba