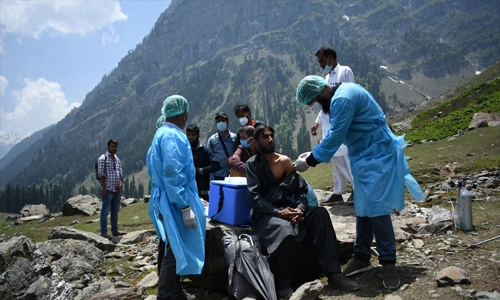 As India rushes to vaccinate its people against the coronavirus, medical workers often have to trek to perilous heights and across treacherous terrain to reach those in remote areas.

In the northern region of Lidderwat, more than 100 km (60 miles) from the capital of India-administered Kashmir, medical teams have had to trek more than six hours on foot and ponies to reach nomadic and shepherd tribes in the mountains.

On a recent morning, Reuters tagged along with a team of over a dozen health workers carrying medical kits and equipment including oxygen cylinders atop ponies and on foot to Lidderwat.

In a meadow surrounded by mountain peaks, the workers set up the vaccination site, donning blue protective suits as people gathered. Part of the challenge was also to convince people. “They (nomadic tribes) are not entirely educated or aware about vaccination,” the locally-based medical official Nasir Khan told Reuters.

“We had to talk to them, motivate them to convince and mobilize them,” he said. “It’s a faith-building process...there was hesitancy in the beginning.” Despite being among the world’s major producers of coronavirus vaccines, India faces a mammoth task in inoculating its 1.3 billion people, partly due to the logistical challenges of reaching remote areas and scepticism and lack of knowledge about the process.

Prime Minister Narendra Modi’s government has said it aims to vaccinate all eligible and willing Indians by the end of this year, but so far, only 240 million of the country’s 950 million adults have had at least one shot, according to federal health data.

The country is battling a ferocious second wave of the coronavirus that has battered its health system, and scientists have warned vaccinations are critical to protecting against a third wave of the virus expected later this year. India has recorded some 29.3 million COVID-19 infections - the second-highest number after the United States, as well as 363,079 deaths.

Health systems have fallen short of reaching many in the rural interiors and remote corners, some of which have no motorable roads. “Until today, not a single doctor has come to this area, but today, a team has come to administer coronavirus vaccines to us,” said Mohammed Ashraf, one of the 200 people who got their first dose of the vaccine on Thursday at Lidderwat. “We are happy and thankful.”