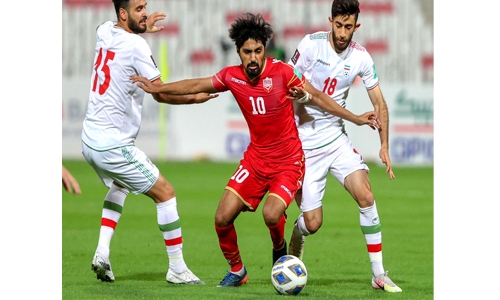 Bahrain suffered a disheartening 0-3 loss to Iran Monday night in joint-qualification for the FIFA World Cup 2022 and AFC Asian Cup 2023.
The match, which was the penultimate fixture for the Bahrainis in this stage of qualifying, was played at the National Stadium in Riffa.
Two second-half goals from star player Sardar Azmoun, plus a third from Mehdi Taremi, earned the visitors their big win.
Azmoun, who is the reigning Player of the Year in the Russian Premier League, scored both his goals within a seven-minute span, which totally deflated the spirits of the Bahrainis.
Taremi then rubbed salt into the hosts’ wounds by taking advantage of some poor defending and sealing the final score.
The result put Bahrain in a precarious position on the Group C table, as they dropped all the way to third place with their first loss of this qualifying round. They had started the day in the first position.
Iraq is now the leaders with 14 points while Iran and Bahrain have 12 apiece, but the Iranians have the superior goal difference.
The Bahrainis must finish in the top two of the group to have any chance of advancing in World Cup qualifying.
They are already assured of at least a spot in Asian Cup qualifying’s third round.
Bahrain must now win their final qualifier against Hong Kong on Tuesday next week, as well as hope that both Iraq and Iran drop points in any of their remaining two matches, which include a head-to-head, also on Tuesday next week.
Both Iran and Bahrain came up short with their chances in the first half and headed into the interval goalless.
The Bahrainis put up a good fight in the first 45 minutes, but that changed after the break, particularly following Azmoun’s opening goal.
Amidst some porous Bahrain defending in the 54th minute, the Zenit Saint Petersberg forward received a through-ball from Taremi in the box, who was given too much space to operate.
Azmoun then just needed to beat Bahrain goalkeeper Sayed Mohammed Jaafar from close range, and he made no mistake with his left-footed attempt which he sent into the bottom-right of goal.
Bahrain then fell behind even further a minute after the hour-mark with an impressive individual effort from Azmoun.
He charged towards the goal and was left with a one-on-one with Jaafar, whom he beat with a low shot into the bottom-left corner.
Taremi applied the final nail in the coffin in the 79th minute. The FC Porto striker was assisted by Ahmad Nourollahi, whose pass into the box following an error from Bahrain found his teammate with plenty of room to fire in unchallenged into the bottom-left of the net.
Iran came away with their fourth win in six matches to go with two losses.
Attachments area