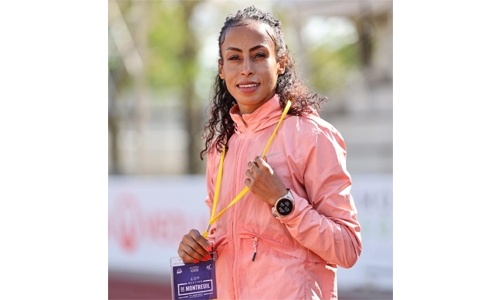 Bahraini elite athletes Kalkidan Gezahegne and Winfred Mutile Yavi have both achieved the qualifying standards for the upcoming Tokyo Olympic Games in their respective events.

Having previously already qualified for the women’s 10,000 metres, Kalkidan also met the entry requirement for the women’s 5,000m while finishing second at the Meeting International de Montreuil in France this week.

Winfred, meanwhile, qualified for the women’s 3,000m steeplechase at the Olympics while taking third place in the Doha Diamond League meeting in Qatar. Both Kalkidan and Winfred secured their entries with new personal best times.

In Kalkidan’s race, the 30-year-old long-distance specialist battled hard for the win but had to settle for a close second. She completed her run in 14:52.92, less than a second behind winner Beatrice Chebet of Kenya, who had a mark of 14:52.06 in the first place.

Sheila Chepkirui Kiprotich, also of Kenya, was third in 14:54.06 among the 16 participating athletes. Kalkidan’s time was good enough to earn her entry into the women’s 5,000m at the Tokyo Games. The qualification standard for her event is 15:10.00.

In Doha, Winfred put on a strong performance in the steeplechase amongst some of the world’s top athletes in the Diamond League meeting.

With her time, Winfred, who is the Asian and Asian Games champion in the 3,000m steeplechase, beat the Olympic qualifying standard of 9:30.00. It was also her first race of the 2021 outdoor season and a new personal best. The 21-yearold’s previous top time in the steeplechase was 9:05.68, set in 2019.