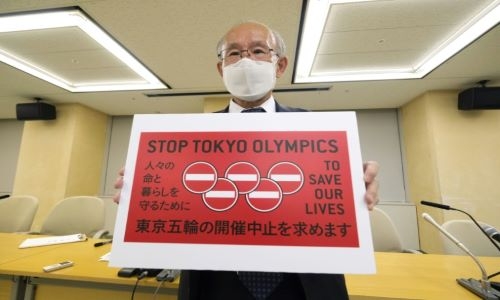 Japan’s government is expected to widen a virus state of emergency yesterday, just 10 weeks before the Tokyo Olympics, as campaigners submitted a petition with more than 350,000 signatures urging the Games be scrapped.

With Tokyo and other areas already under emergency orders until the end of May, three more regions -- including northern Hokkaido, which will host the Olympic marathon -- are set to join them. The widening emergency, aimed at combatting a fourth wave which is putting Japan’s medical system under strain, comes with public opinion firmly opposed to holding the Games this summer, fearing further infections.

Kenji Utsunomiya, a former candidate for Tokyo governor, urged Games organisers to “prioritise life” as he submitted the 351,000-signature petition to city authorities. “I think the Olympics this time is about whether we prioritise life or a ceremony and event called the Olympics,” Utsunomiya said, urging Tokyo Governor Yuriko Koike to push for cancellation. The petition is also being sent to the IOC and International Paralympic Committee (IPC) as well as local organisers and the national government.

“Holding the Olympics under these circumstances means precious medical resources have to be set aside for the Games,” Utsunomiya warned.

On Thursday, a doctors’ union warned it was “impossible” to hold the Games safely during the pandemic, but organisers say virus countermeasures will keep the athletes and the Japanese public safe.

In an interview with AFP, International Paralympic Committee chief Andrew Parsons acknowledged Japanese “anger” over the Games. But he said strict rules, including daily testing and limited movement for athletes, meant the chance they could infect anyone was “really remote”.

“We want to provide this feeling of certainty,” Parsons said. “Because we see that the anger comes from this concept that it’s the Japanese population’s safety versus the Games. I believe they can coexist.”