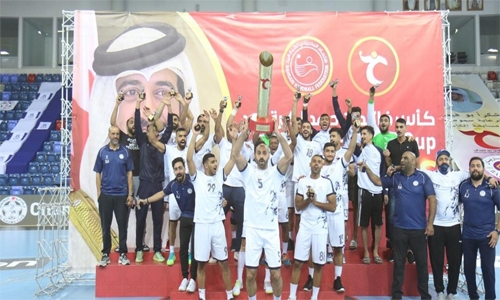 Najma clinched the coveted title after defeating Barbar 38- 37 in overtime in the tournament final, played at the Khalifa Sports City Arena in Isa Town.

The two finalists later picked up their respective trophies and medals at the end of the contest in a socially distanced awarding ceremony.

With the result, Najma claimed a sensational double for the national handball season.

They had already retained their title in the Bahrain First Division Handball League before winning the inaugural edition of the Khalid bin Hamad Handball Cup yesterday.

Najma were able to come away with their victory after making some crucial plays in overtime.

The game was tied at 31-all at the end of regulation.

Mohammed Habib then set the tone for Najma in the extra sessions with the opening goal in the first of two five-minute periods.

An Ali Eid effort on the stroke of the first overtime later put Najma ahead 34-33, and then-teammate Komail Mahfoodh scored in the opening possession of period two to give Najma a crucial two-goal cushion.

Barbar continued to keep things close and get within a goal with successful throws from Ahmed Al Muqabi and Mahmood Abdulqader, but then a key save by Najma’s Mohammed Abdulhussain on an Al Muqabi attempt, followed by a Habib goal on the other end for Najma, put the victors ahead 38- 35 in overtime’s closing stages.

Barbar was able to score twice more before the final whistle, but that had no impact on the outcome.

Earlier in the contest, Najma were able to build a narrow lead at the half and went ahead 18-15 heading into the interval.

Barbar goalkeeper Qassim Al Shuwaikh made two crucial saves in the final second to send the match into overtime.