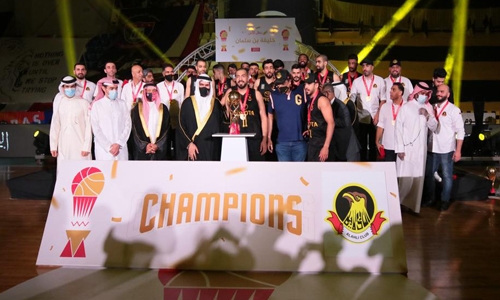 As the result, Ahli secured a league-and-cup double for the second consecutive year. They had also defeated Manama in this year’s league championship series, which they sealed with a two-game sweep. Ahli, coached by Ahmed Jan, had a brilliant start and stormed to a 35-18 lead at the end of the first quarter.

Manama battled back in the second quarter but still enjoyed a comfortable 53-43 lead at the half. But Ahli turned things up in the third quarter once again and took a 20-point lead, 79-59, into the final canto.

They led by as many as 24 points the rest of the way en route to the big title-clinching win. American Mike Harris and Bahraini guard Hesham Sarhan combined for 64 of Ahli’s points. Harris finished with 34, including four three-pointers.