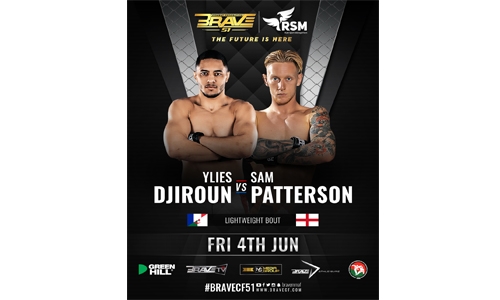 Two of the most exciting European fighters on the BRAVE Combat Federation roster will collide on June 4th, as the fastest-growing MMA organization in the world has announced that Ylies Djiroun will face off against Sam Patterson in what promises to be a very important bout for the future of the division.

They are set to meet at BRAVE CF 51: The Future Is Here, which will be hosted in association with Rukh Sports Management. Fresh off a monumental victory on his promotional debut, French-Algerian Ylies Djiroun will look to go 2 for 2 on June 4th and position himself as one of the top Lightweights in the organization. ‘’Broly’’ came in with a lot of expectations on his shoulder as the 18-6 fighter submitted Abdul-Rakhman Makhazhiev in the main event of BRAVE CF 48.

Now he will have a different test in front of him with Sam Patterson. ‘’The Future’’, one of the tallest athletes in the Lightweight division worldwide (standing at 6’3’’ or 193cm), is coming off a career-defining victory of his own.

At BRAVE CF 41, he knocked out experienced striker Felipe Silva in the first round in a fight that many predicted would be a war. Before Felipe, Patterson earned another huge victory as he outstruck Cian Cowley en route to a third-round stoppage win at BRAVE CF 33. After traveling to Jordan, Bahrain, and Saudi Arabia for fights, Sam will make his European debut in Belarus. BRAVE CF 51 will take place at the Falcon Club, in Minsk, Belarus, on June 4th.

The historic first BRAVE CF show in the country will be headlined by another huge Lightweight bout with former world champion Lucas ‘’Mineiro’’ Martins taking on Marcel Grabinski.