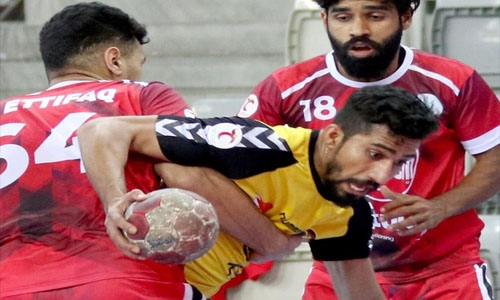 Al Ahli advanced to the semi-finals of the Khalid bin Hamad Handball Cup early yesterday morning following a 28-19 victory over Al Ettifaq. The victors led 13-9 after the opening 30-minute period and were able to almost triple their advantage in the second half.

Ali Youssef top-scored for Ahli with six goals in the contest while Mohammed Abdulredha added five. Following the game, Youssef was named the Player of the Match and he was presented with an award by Bahrain Handball Association board member Majid Mirza.

Ahli now moves on to the semis where they will face the winner of the other quarter-final between Barbar and Al Shabab. That match was previously postponed and the BHA announced yesterday that it has been set for this Saturday at 9.30 pm.

The two games in the last four are then scheduled to be played on Tuesday next week. Back-to-back league champions Al Najma will clash in the first semi-final, scheduled for a 9.15 pm throw-off.

The other match will begin at 11 pm. The tournament is being held for the first time and it is under the patronage of Supreme Council for Youth and Sports first vice-chairman and Bahrain Olympic Committee president His Highness Shaikh Khalid bin Hamad Al Khalifa.