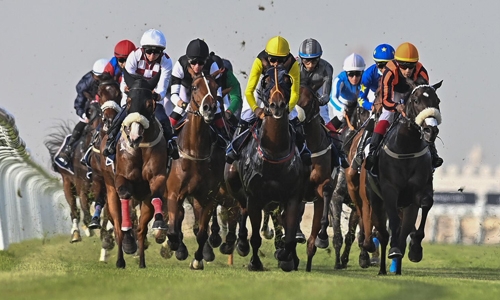 The day’s feature event will be held over 12 furlongs with a total prize of BD3,000. Six imported horses are entered aged three and above. They are representing leading owners such as Victorious and Al Mohamediya Racing, among others, and leading trainers such as Hesham Al Haddad and Fawzi Nass.

A top-class field of jockeys is also saddling their contenders. They include Paddy Mathers on Medal Winner, Abdulla Faisal on Fifth Fleet, Daisuke Fukumoto on Forbidden Land, Adnan Jaffar on Haalick, Marcialis Jaures on Macaque and Husain Makki on What A Welcome. Meanwhile, the day’s sixth race will be for the HH Shaikh Mohammed bin Abdulla bin Isa Al Khalifa Cup. It will be over eight furlongs with a BD2,000 prize or imported horses, with a large roster of 15 participants in the fray.

The HH Shaikh Isa bin Abdulla bin Isa Al Khalifa Cup will be up for the taking in race five, covering a seven-furlong distance with a BD2,000 prize. Eleven imported horses are set to compete. In the day’s third race, the HH Shaikh Hamad bin Abdulla Al Khalifa Cup will be on the line. There will be eight locally bred runners in all over seven furlongs vying for the largest share of the BD2,000 prize.

In today’s other races, three more cups are to be won. These are the Zaid bin Theeb Kobra Group Industry and Trade Cup in race seven, Al Roudha Cup in race two and Owners Cup in the opening race of the day.