One is enough: Germany win narrowly in Romania to top WC group | THE DAILY TRIBUNE | KINGDOM OF BAHRAIN 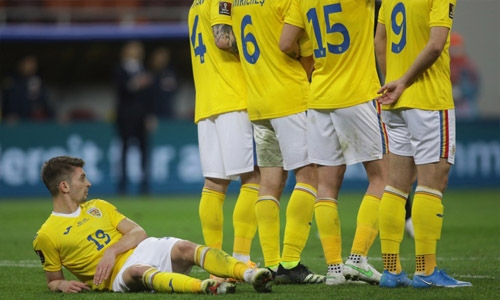 One is enough: Germany win narrowly in Romania to top WC group

Gnabry tapped in a 15th goal in 19 internationals in the 16th minute, but coach Joachim Loew watched in growing frustration as Germany failed to make the game safe through a combination of poor finishing and inspired goalkeeping from Florin Nita, dpa reported.

But with Romania toothless in attack, Gnabry's solitary strike was enough to keep Germany perfect in the group with two wins out of two before they conclude their opening triple-header at home to North Macedonia on Wednesday.

"We have worked very well against the ball and won it well," Loew told broadcaster RTL. "We had some good combinations.

"If you can be critical, it is the chance conversion - we could have made the game easier if we'd score the second goal."

But Loew, one game closer to leaving the German job after Euro 2020 in summer, added: "Overall you can be happy, we have something to build on."

Kai Havertz was key to the only goal with his run finding space on the right and cross giving Gnabry a simple task to score.

"Important for us is the three points," said Gnabry. "In the end it doesn't matter how we got them.

"We should have decided the match much earlier. We have made life hard for ourselves."

Havertz had seen the tone set for the game moments earlier when Nita saved his shot from a similar position.

The home keeper then denied Leon Goretzka, who along with Leroy Sane played despite being a doubt with a muscle injury, and made spectacular saves from Gnabry and midfielder Ilkay Guendogan.

Sane poked wide in the second half and substitute Timo Werner also failed to beat Nita with a clear sight of goal.

At the other end, Germany keeper Manuel Neuer, playing his 98th international the day after his 35th birthday, had only a couple of routine saves to make but Nicolae Stanciu almost stole a point when he hit the side-netting after a careless pass from Antonio Ruediger.

Armenia are a surprise name level with Germany on six points after Tigran Barseghyan and Khoren Bayramyan struck in the second half to shock Iceland 2-0.

That followed an opening win at Liechtenstein and they carry their good form into a home match with Romania in midweek when Liechtenstein also host Iceland. North Macedonia thrashed Liechtenstein 4-0 in Sunday's other game.