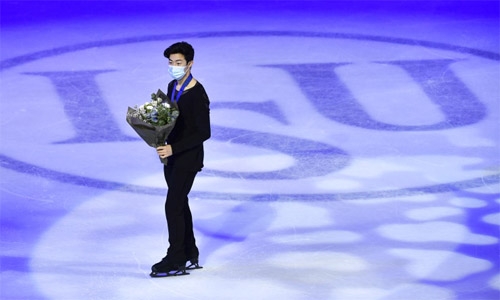 Victoria Sinitsina and Nikita Katsalapov captured the ice dance gold, making it the third title Russians had captured this week. However, with Russia banned at such events under sanctions imposed by the World Anti-Doping Agency (WADA), they skated as FSR athletes under the flag of the Russian figure skating federation.

Hanyu was in the lead after the short program while Chen was third. But the 21-year-old American, who has not lost since the Pyeongchang Winter Olympics in 2018, produced a breathtaking performance to bag his 10th consecutive international gold.

Chen began with a quadruple Lutz, which he had failed to land in the short program but executed perfectly in the free skate, and then produced four more quads to finish with a score of 320.88 points -- ahead of Japanese teenager Yuma Kagiyama in second.

“It’s amazing. The fact that we’re able to be in this worlds after this unprecedented year... I’m very elated, I’m very happy,” Chen said.

“ tried to remind me to enjoy being here. I don’t know how many more worlds I’ll be at. In doing that, I was able to be a lot more calm. Going the way that it did, I’m very happy.”

Hanyu, a two-times world champion, had a segment to forget after he put a hand down on the quad loop and quad Salchow, while his landing on the triple Axel was off-balance.

“He’s truly a skating legend and someone who’s just revolutionised this sport. He didn’t have the skate that I think he wanted to,” Chen added.

Hanyu’s performance was only good enough to finish fourth in the segment, and the Japanese had to settle for bronze with an overall score of 289.18.

His 17-year-old compatriot Kagiyama took the silver with a near-flawless performance and personal best score of 291.77.

Chen, who won in 2018 in Milan and 2019 in Saitama, had been deprived of the chance to make it three golds in three years when the world championships were cancelled last year due to the COVID-19 pandemic.

Sinitsina and Katsalapov produced a dazzling free dance to claim gold with a total of 221.17 points.

Due to the COVID-19 pandemic, the ice dancers presented their own partners with their medals and bouquets on separate podiums to maintain social distancing.

Earlier in the week, Anna Shcherbakova led a Russian sweep of the women’s singles, while compatriots Anastasia Mishina and Aleksandr Galliamov won the pairs gold.